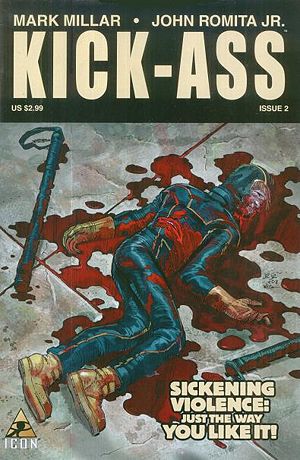 “I can’t read your mind, but I can kick your ass”

Today, I watched movie Kick Ass (2010). It's directed by Matthew Vaughn, who also directed "Wanted". His movie seems always satisfy the deviant desires of salaryman like me. ★★★★★!!!

When I watched a preview of this movie, it was too babyish. But, there are many scenes of brutality, and it was very impressive to me. Especially, the rescue scene of Kick Ass/Big Daddy part of the final act brought tears to my eyes. (-_-;;)
- April 24, 2010 1 comment:

If one couldn't guess from my having built this site using Django, I happen to be a big fan of using Python in various stages of software development. My focus on graphics and image processing requires more robust array and matrix datatypes and their associated operations than what Python includes in its standard library. There are two extensions to Python that provide this functionality: numpy, for efficient, native memory arrays and matrices, and scipy for numerical tools such as solvers, optimization, and Fourier transforms.

While the default installs of these modules are significantly faster than any Python-native implementation, they are still quite slow. The code included in with numpy and scipy to perform this computation is not very efficient. Optimized libraries have been written for the methods that numpy and scipy rely on, so the best of both worlds would be the ease-of-use provided by Python and the performance of tuned architecture-specific math methods, which is what this explains how to install.

This article is a step-by-step set of instructions on how to install the latest Python, numpy, and scipy along with optimized versions of the native code libraries they depend on. It's most useful if your operating system does not have pre-packaged versions available, you'd like to install a potentially faster version of the modules than provided, or you don't have root access to use the package system on your platform.

I'll preface this entire process with the fact that it's a rather large pain in the ass. In many cases, you can get pre-compiled versions of the libraries for your platform. They might not be as optimized as the result of my instructions here, but could serve your needs well enough. If you just want to install them to investigate what they are capable of, I'd forgo the heavy optimized version for now. Basically, if you can avoid compiling all the source and just use packages, I advise doing so.

All the steps outlined below assume you are using an operating system similar to UNIX and have the GNU toolchain available. Unless you are attempting to do this under Cygwin or similar, the steps don't work. All the modules are pre-compiled for Windows, and it's probably your best bet. They are linked against the same ATLAS library we are using, so I imagine they are reasonably fast.

OS X users have a slightly more involved process than Windows users, but end up with a more optimized version of the setup. The fine folks over at trichech.us have collected all the modules we need into single scipy Superpack for both PowerPC and Intel hardware. These are all built against the ActiveState version of Python 2.4, which you will need to install as well:

Several flavors of Linux contain the numpy and scipy modules in their distro sets. This is covered by the scipy installation docs.

OK. Assuming none of the previous options cover your needs, let's get down to business. I'm not entirely sure what the full set of requirements for Python is. It's covered in the documentation on the site, and the README in the source tarball. It installs fine with the standard developer set on my SuSE 10.1 machine. You will definitely need the ability to compile C/C++, which gcc does more than adequately. Also, because numpy and scipy are still under very active development, I grab the bleeding edge version using Subversion, which you will need the client for.

The only requirement that I know of that might not be installed is the g77 portion of the GNU compiler for compiling FORTRAN programs.
(Yes, this is 2007 and we're still using FORTRAN. Lots of linear algebra libraries do. Get over it.)

Having ensured we have these in place, pick a temp location to download and compile our libraries in:

The first order of business is to install Python, which is currently 2.5. So, get the latest version and unpack it:

./configure --enable-shared --with-threads
If you are installing to a non-standard location, you can alter the directory prefix with the flag:

./configure --enable-shared --with-threads --prefix=$SOMELOCATION
Once that has completed checking for various modules, we compile the source and test to make sure the interpreter is functioning correctly:

make
make test
Assuming there are no errors in compilation or testing, then install the software:

If you installed to a different location, and haven't already made use of other software in that location, you'll need to update your $PATH variable to select the new Python install over the standard system install.

export PATH=$SOMELOCATION/bin:$PATH
Then type source .bashrc or source .cshrc depending on which you use. And check to make sure you have the right version. Start the Python interpreter and check that the version is 2.5 and location of the executable is the one we installed:

The next task is to install the Fastest Fourier Transform in the West, better known as FFTW. This library provides efficient Fourier transforms, which I shouldn't have to tell you are very useful for signal processing tasks.

Returning to our top directory, we grab that code

make
make install
Now, we repeat the exercise for the single precision library, adding the --prefix argument if needed:

make
make install
Having completed that, we now have a working version of FFTW.

The second library to install provides efficient routines for linear algebra, and is a bit more complicated than the FFTW. The library consists of two parts:

The source of LAPACK you can download from the site contains an implementation of BLAS, but that BLAS version does not have very well optimized routines. Instead, we use a different BLAS implementation called ATLAS which can automatically tune itself for whichever platform we are compiling it on. So, it ends up being a somewhat complicated method of building the full numerical package LAPACK, but replacing the parts of BLAS and LAPACK with ones provided by ATLAS, which are considerably more efficient.

cd /var/tmp/Python
Get the LAPACK source

cp INSTALL/make.inc.LINUX make.inc
make lapacklib
Having compiled the static LAPACK library, copy it to the same library name as the ATLAS library we will make in the next part:

You have 2 options on building ATLAS: compiling the source yourself and tuning it to your platform, or grabbing a pre-built version for your hardware architecture. While the compiling and tuning ATLAS will result in the absolute best performance, it also takes several hours to complete. I'll cover the latter option, as it's worked well enough for me. If you choose to build it from scratch, it's pretty similar in nature. From the ATLAS site:

grab the Linux binary for your architecture and drop it in the same temp location you made. As of current, the latest stable build is version 3.6.0, and I'll assume this is being done on a Pentium 4 class machine with SSE2 instructions.

Having created the full ATLAS/LAPACK hybrid, copy it to the necessary location:

Alright. Now we have all the parts required to build numpy, so lets check that out of it Subversion repository. From the top main directory of this working space, to get the latest version of numpy:

cd /var/tmp/Python
svn co http://svn.scipy.org/svn/numpy/trunk numpy
cd numpy
We'll need to instruct it where to find the ATLAS/LAPACK hybrid and FFTW libraries we made, so we need to edit the site config file:

pico site.cfg
and add the text

From here we need to build numpy:

./setup.py build
It will dump out a lot of configure and build results. Near the top of the resulting contents you should see text notifying you that it found the ATLAS/LAPACK files to the effect of:

./setup.py install
Assuming you have the command python associated with the proper install on your system (if there are several) it will install it in the proper place.

Next, we go about testing our install. Due to the way python imports modules, if it sees the local numpy directories it will try to use those over the ones installed. This will do the wrong thing, and cause a massive headache trying to figure out why nothing works right. For sanity's sake, the easiest way to avoid this very confusing outcome is to switch to some other directory entirely:

cd /
So, run python and on the python shell enter:

>>> import numpy
>>> numpy.test( 10 )
And it should display some text ending in something like:

OK
Congratulations. You now have a working version of numpy.

Installing scipy follows in roughly the same process as that of numpy. In fact, all the hard work has been done in the site.cfg we make for numpy, as scipy scans the same file to learn where its libraries are

Returning to our working directory, we check out scipy:

cd /var/tmp/Python
svn co http://svn.scipy.org/svn/scipy/trunk scipy
cd scipy
Since it reads the site.cfg file that numpy conveniently moved into its own install directory, we can just run setup

./setup.py build
It will spit out a lot of text. Assuming that the entries in the site.cfg are correct, you should see a piece of text similar to:

./setup.py install
Assuming you have the command python associated with the proper install on your system (if there are several) it will install it in the proper place.

We now test the install once again moving to somewhere to avoid import confusion:

cd /
So, run python and on the python shell enter:

>>> import scipy
>>> scipy.test( 10 )
This time, it'll spit out a lot of text for all its test results. Once done you'll get something like:

OK
Don't freak out too badly if you get a couple failures. They usually deal with numerical precision issues. Depending on your needs this may or may not be a problem. I'm not an expert on how to go about fixing them. I've never had any problems with them in my work.

Assuming you're pleased with the outcome, you now have working, optimized copies of numpy and scipy.
- April 15, 2010 No comments:

Email ThisBlogThis!Share to TwitterShare to FacebookShare to Pinterest
Labels: programming

Deleting files that have a minus symbol as file name

Email ThisBlogThis!Share to TwitterShare to FacebookShare to Pinterest
Labels: linux