What's the most popular NoSQL?

I'd say that the answer is a MongoDB.

MongoDB is growing quickly in popularity because it offers a relatively rich range of features, while maintaining impressive speed. The features include built-in Indices, range queries, support for replication, and auto-sharding. A Map/Reduce function allows you to add to the aggregate functions natively supported and do large-scale jobs like nightly reports. 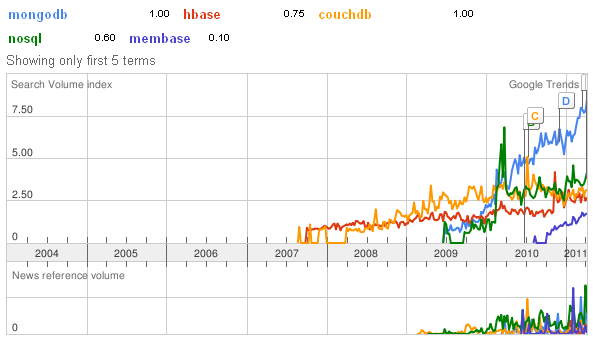 According to some reports, Java-based NoSQL solutions seems are not free from the GC(Garbage Collection) and performance problems. MongoDB is written in C++ but has drivers for Perl, Python, PHP, Java, and Ruby ... So, powerful!
- April 18, 2011